Where we cross the Pennines, get lost and recover with tea and scones courtesy of the farmer’s wife! Continue reading →

You’ll be relieved to learn that by this tales’ end we will have left the Lakes District and be on flatter ground.

But only after a harrowing 16 mile slog from Patterdale to Shap.

But that’s getting ahead of ourselves.

First there’s the short 7½ mile leg from Wordsworth’s home of Grasmere. As ever there’s scenery to die for. 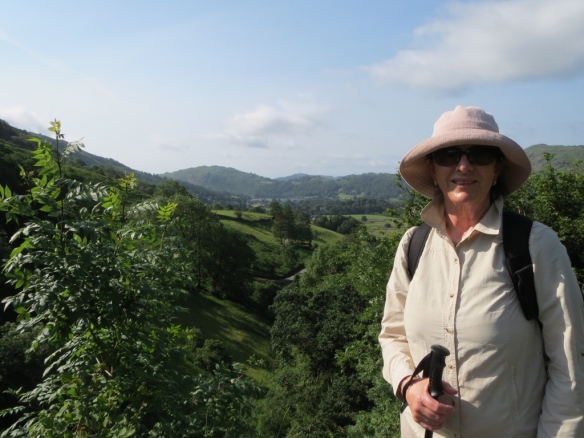 Heading out of Grasmere

It’s one hell of a climb out of Grasmere up to the mountain lake named Grisedale Tarn where the path diverges into several routes, two of which involve even more climbing.

This time, instead of feeling honour-bound to take the higher harder route on from the tarn, we cheerfully decide on the relatively gentle and downward slope into Patterdale, a walk of around two hours. Once there we head straight for the pub. Me for a pot of tea and John for a pint of the local beer.

Patterdale sits in a valley. A valley that RAF jets streak along practicing low level flying. We know because as we sat there contemplating the view and quiet two of them startled the bejesus out of us as they flashed past. After that bit of excitement we found our B&B for the night, an old school house decorated in the Balinese style. Have a look at our bed! 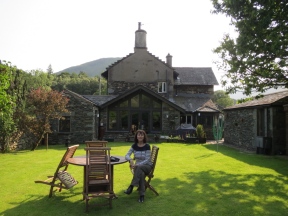 I seem to remember saying in my first post that we had two shattering days during the walk. Well, it’s a good thing we had a good night’s rest because the first is coming up! The Lakes definitely don’t want you to easily forget them!

After a lovely breakfast during which we were waited on by our hosts we were again on our way. Up and over yet another mountain, Kidsty Pike, one of the highest points on the walk. In the next photo I’m pointing in its general direction.

We know today is going to be hard because the guide book says so. It also says there are no villages, pubs, tea houses or toilets between us and Shap, our next stop 16 miles away. So, it says, be prepared for a slog of a day.

Kidsty Pike is the only mountain we have to climb and the guide book diagram shows the rest of the way is relatively level. I say relatively, because all of those little bumps in the drawing mean you’re going either up or down the entire way.

By the time you’ve scrambled, slipped and slithered your way down the shingly descent from Kidsty Pike to Haweswater Reservoir—which serves Manchester—you’re ready for a bit of easy travelling. 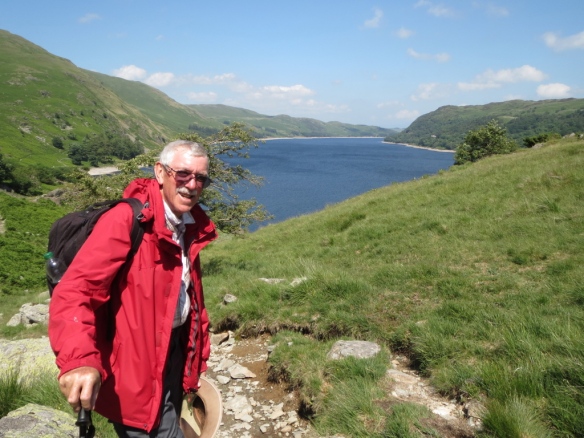 … amble while spinning your dainty parasol … Soon you’re panting like a hippo on a treadmill high above the shore.

All while gritting your teeth because your toes are screaming from the downhill descent.

It’s at the further end of the reservoir we say goodbye to the Lakes District and start seeing the occasional C2C signpost. There follows several miles of fording streams, crossing stiles and negotiating bogs in lush lowlands before reaching the next landmark, the ruins of Shap Abbey.

Here you think, WooHoo, nearly there! You’re not. There’s still an hour or so to go. We recklessly eschewed the offer of a lift into town from some passing locals. No, we said, thanking them, but we feel that would be cheating. We must walk. Good grief, we thought afterwards, will we never learn!!

By the time we reached Shap, a long narrow village that pretty well lines the road, we were knackered and in need of a lie down.

As ever on this walk our accommodation had been pre-booked so it was just a matter of finding it. Which we did at the end of the village.

New Ing Lodge has a variety of room types as well as camping out the back. We were lucky enough to score the only room with an ensuite. At this stage of the game, lining up to use the shower and toilet would have been more than we could handle. 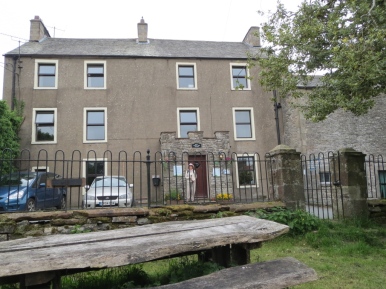 Next time we make it to the Pennines.

We continue into the Lakes District with sometimes gritted teeth

It takes us five days to navigate our way across the Lakes District.

The weather’s at its worst for this part of our walk. There’s sunshine, sure—after all, it is summer—but the rain! There’s plenty of that too.

Take, for example, our second day which took us from Ennerdale to Rosthwaite where, thank goodness, there was a lovely little hotel with a very comfortable room and good grub waiting. But first we had to cross a mountain. First we had to climb Loft Beck. I composed this about our experience scrambling up:

The second day in and the weather is foul,
we’re scaling Loft Beck and the wind it does howl,
what I would give
to be sure I will live,
is everything I’m carrying to survive.

The rain stings with little bullets of ice
that hit my exposed bits like pellets of rice,
it cascades down the rocks
soaking my socks,
I have doubts I will ever revive.

The wind roars and blows,
I can’t stem the flow from my nose,
snot flies to every point in the land
because I daren’t spare a hand.
All I want is to safely arrive. 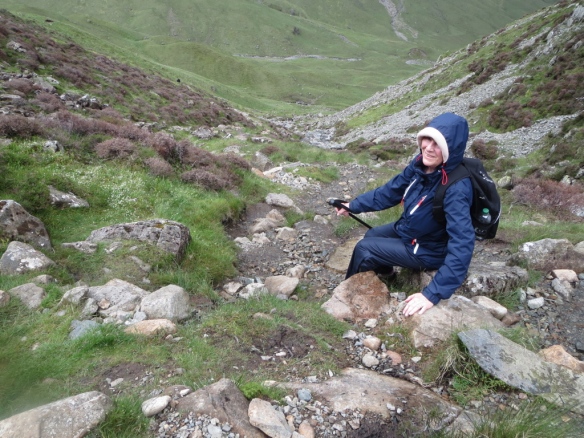 Grim, I was, determined not to be the one who slipped and needed a helicopter rescue. No, that was ‘fortunately’ someone else later that day. We heard about it at our hotel that night. The poor woman was pretty banged up having fallen quite a way.

Before beginning this walk we’d determined that if there was a choice between the low road and the high (mountain tracks) we were going to take the high. We reasoned we may never be this way again and we wanted to see as much of the scenery as we could.

Fine in theory. But when the mist hangs low and the rain is sleeting the guide book tells you to not be stupid. Besides, what are you going to see in zero visibility? Believe it or not we put in a couple of minutes debating, and felt that somehow we were wimps for not choosing the mountain.

Thank goodness for the several YHA huts along the way. Lunchtime saw us at Black Sail where we could sit in the dry for half an hour and buy a hot tea, coffee or chocolate. A big mug of chocolate got me! The little speck that looks like a tree to the right of John’s head is the hut. And the mountains we have yet to cross are behind.

Once over and down the other side, which was nearly as hair-raising because of loose rubble, is an old slate mine that’s still in low-key operation. 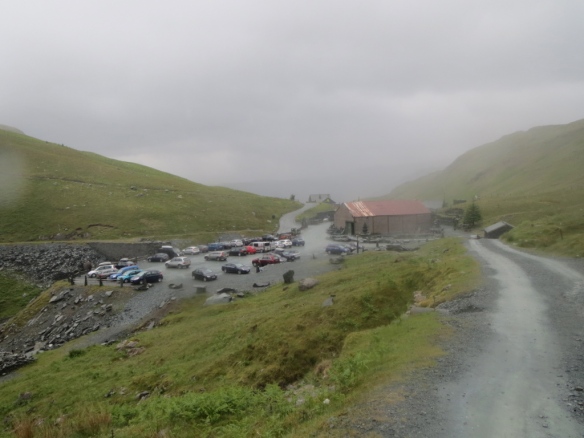 The paths aren’t easy underfoot. We met people wearing footwear totally inappropriate for the terrain. Thank God, we muttered more than a few times, for good walking boots. I’d invested in a pair of Berghaus—the best, my UK son-in-law informed me with an impressed nod—and they were proving to be brilliant.

Here the path, awash with rain, intersects a dry stone wall and stile

It’s easy to get lost in the Lakes. There’s often no hint of a track and because it’s national park no signposting is allowed. To overcome this, walkers over successive years have built stone cairns to mark the way. Even so we wandered off course several times. Not too far, but enough to have us standing and scratching our heads while scanning the terrain for other walkers, which would show the way we should be heading.

And believe it or not, on those high peaks, in the middle of summer, you can get bogged.

John went in ankle deep at this point. Unsympathetic me laughed and hopped across really quickly and only got muddy soles. The bogs aren’t always apparent and they’re everywhere. You can find yourself sinking on what looks like a firm grassy tuft.

Experienced walkers told us we were lucky. Most years the bogs are much worse and much more widespread. but early good weather had dried out a lot.

That day was a 16½ mile slog. But don’t get me wrong. We were glad to be there and the overnight stay in the Scafell Hotel at Rosthwaite revived us. 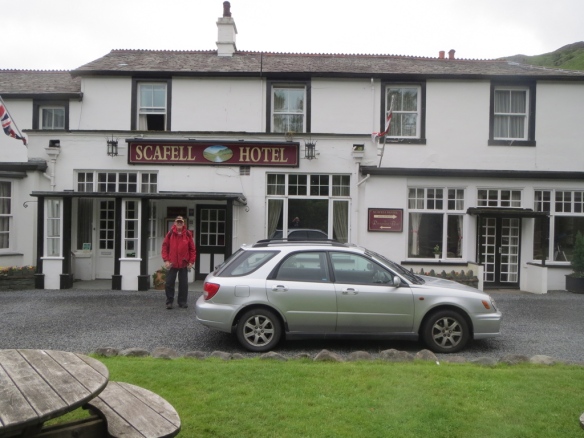 The next day was an easy 8½ miles to Grasmere, Wordsworth’s home for nine years and where he’s buried.

And it doesn’t get any lovelier than this!

The day was gorgeous so we took the high level route to Helm Crag which is the last peak before Grasmere and overlooks it. 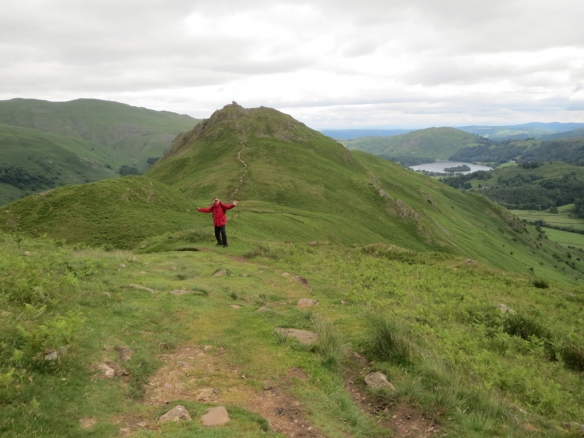 It’s a relief to reach the bottom as it’s not an easy descent—were any of them!—and find yourself in Lancrigg Woods taking the Poet’s Walk into the village. The guidebook describes how:

Wordsworth’s sister Dorothy would sit at this spot while her brother walked up and down composing verses.

We could see why. It’s beautiful.

Next time: We say goodbye to the Lakes District.