Our walk across England from the Irish Sea to the North Sea may be over but we’re not in a hurry to leave North Yorkshire.

So we stay an extra day and take the local bus up to Whitby.  I’d visited the town in 2000 with our oldest daughter and wanted to show it off to John.

What I found was a town that had been discovered by the masses.  In 2000 there were tourists, sure, but it certainly couldn’t have been described as congested. Nowadays I’d say the locals would have a real love-hate relationship with the hordes that descend.

For those of you who don’t know, Whitby is a seaside town in North Yorkshire on the mouth of the River Esk. 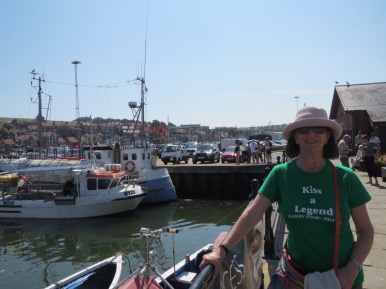 The day we visited the sun was warm and the sky a bright blue with no clouds. It was gorgeous and we ambled around taking in the sights, enjoying just being able to stroll and not be anywhere in particular.

One of the features of Whitby is the Abbey.  In 2000 I was able to ramble through the ruins but today it’s walled off and you have to pay to get in.

Back in 2000 my daughter and I overnighted in the YHA converted stables alongside the Abbey.  We were the only occupants for the night.  They’re now being converted into five star accommodation.

One of my intentions while in Whitby was to buy something made of Whitby Jet as a momento of our walk.  While exploring the laneways we chanced across W Hamond, Jet Merchants, whose claim to fame is that the jet they use is actually Whitby jet.  Shock horror that not every store in Whitby sells the genuine article!

I bought a lovely sterling silver and jet bangle, but I’m not going to post a photo of it because it was stolen about three weeks later and I still get angry thinking about it. But here I am inside while buying it, and then outside, clutching the bag with a very pleased grin. 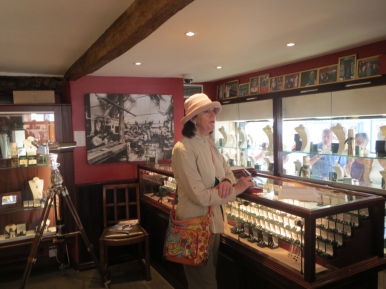 After that we mooched riverside for a while people watching and contemplating, but deciding against, the Captain Cook Experience on the Bark Endeavour.

It’s a lovely spot, as is North Yorkshire generally.  If you’re in the area take the time to visit.  You’ll be pleased you did.  There’s much more to do than we did as we had only three hours.  Next visit we’ll factor in the time to at least have a day out on the North Yorkshire Moors Railway.

The next day we boarded the train for home and enjoyed first class travel and benefits all the way to London! 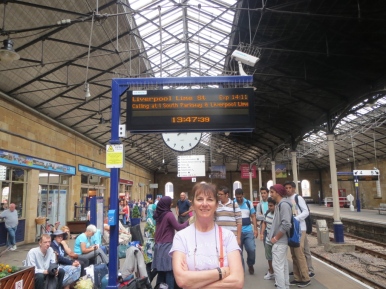