Last month John and I put our walking boots on to hike a section of Canberra’s newest walking trail, the Canberra Centenary Trail.

So-called because it was launched for Canberra’s 100th birthday in 2013 and gifted to its citizens.

Canberra, for those who don’t know much about Australia, is the nation’s capital. It sits in the Australian Capital Territory, a small spot about three hours from the east coast in New South Wales. 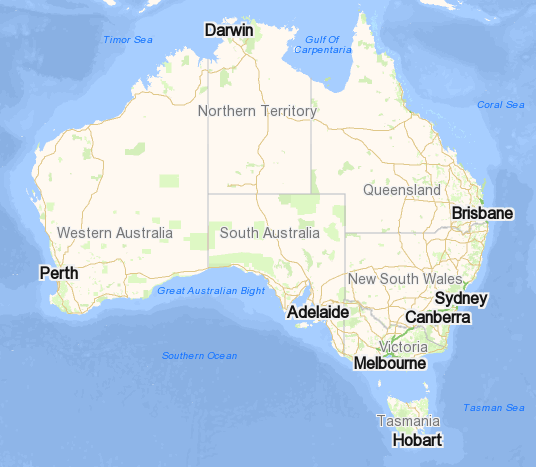 The trail’s a 140 km loop that rings the city, passing through the city, suburbs and surrounding bushland, taking in many of the local landmarks, man-made and natural. It’s broken up into seven sections, each do-able in a day.

There isn’t any overnight accommodation en-route, except for what you can find on the city and suburban sections, so you need to arrange transport to and from.

We had a standing date with some friends to do the walk in autumn when the weather was still fine but cooler. They had done part of section 4—Hall Village to One Tree Hill—last year and were keen to do it again, and as it was new to us we were happy to cruise on their advice. 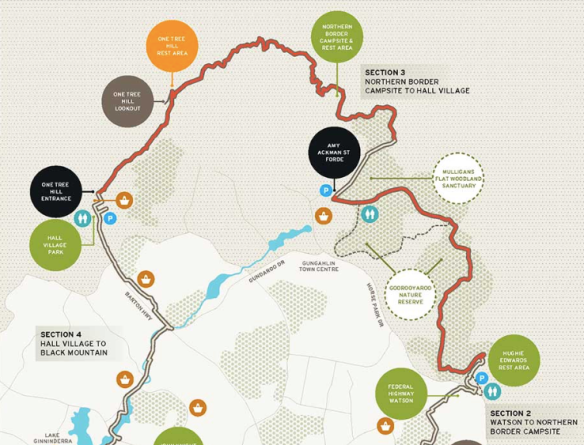 Map of part of the Canberra Centenary Trail from www.canwalk.org.au website.

It was one particularly pleasant Sunday morning in March when we got the call: ‘Let’s do it!’

As per the arrangement we drove to Hall Village, parked behind the village at the start of the track, met up with our friends and set off. The plan was to walk to the One Tree Hill lookout, have lunch, then walk back to Hall Village. And that’s exactly what we did!

It’s not a long or arduous walk so you can concentrate on the scenery and picking out the various parts of Canberra, with your attention constantly diverted by the local birdlife. I was convinced that at times they were telling us off for disturbing them! 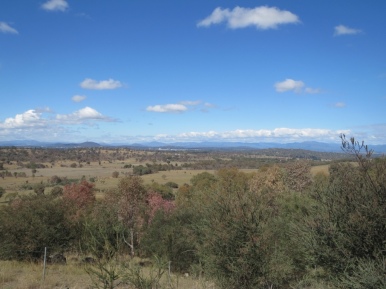 We had a good day. Weather warm but not hot, so no sweating involved. And fine skies, great for good photo results.

The one thing I hadn’t expected was the number of mountain bikers. They whoosh by, generally without warning, no bell ring or call of ‘Bike coming through’. The ones coming towards you are no problem, you can see them. It’s the ones approaching from behind that startle. The track is narrow and they’re not given to steering a wide berth because it would mean leaving the track, so they tend to cut it fine as they pass. Pity, because if they’d let us know they were coming we would have stepped aside.

We finished our walk at the One Tree Hill lookout and admired the view while munching our sandwiches. It’s a great view all around—no wonder a fire tower was built there—but I especially loved looking towards the local mountain range, the Brindabellas. They’re what I see from my front deck at home and I never get tired of their moods. 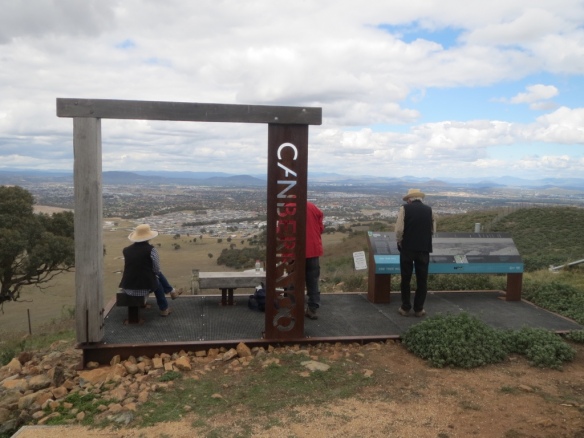 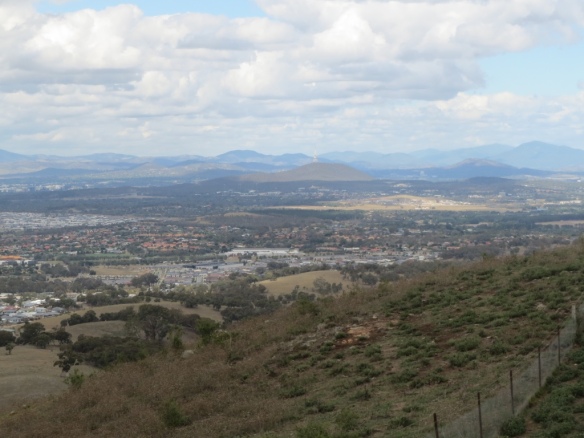 Across the valley to the Brindabellas

And then another leisurely stroll back to Hall Village for a coffee before parting ways to drive home.

A lovely way to spend an afternoon.