Over the last few weeks I’ve been recreating a walk my husband John and I did in July 2013. We hiked for 18 days across England, following the famous Coast to Coast walk from St Bees on the Irish Coast to Robin Hood’s Bay on the North Sea coast.

In the last post we had made it to the halfway point having traversed Cumbria and the Lake District to enter the Yorkshire Moors.

In this post I’ll take you from our last overnight stay in Keld, deep in the Pennines, to Richmond on their eastern side.

Once again I’ve loaded the post with photos. I hope you enjoy them.

From Keld to Reeth we had a choice of two routes: one high, one low. The guidebook suggests the high route for anyone interested in seeing the scars and ruins left from lead mining days. We opted for the more scenic Swaledale Valley route which takes in several little villages, one being Muker, where we took time out for a pot of tea in the local teashop. 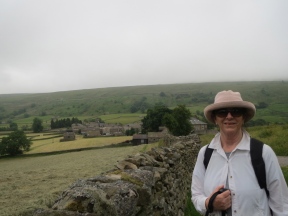 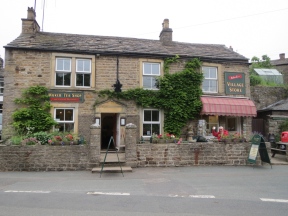 A tiny, lovely, place with a claim to fame of being one of James Herriot’s favourite places. It’s just off the C2C path and involves walking through meadows of incredibly fragrant pasture land. Signs at the entrances ask you to stick to the paths and not trample the plants. 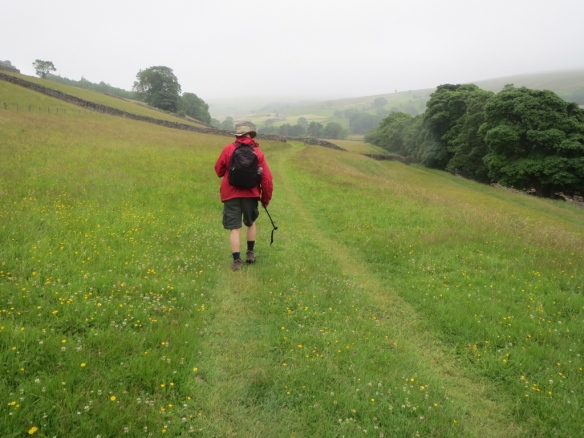 Pasture plants. The aroma is wonderful.

Once back on the road we noticed the trend towards increasingly hard to get through stiles and the ever-present abandoned stone buildings. Any takers for this duplex doer-upper?! 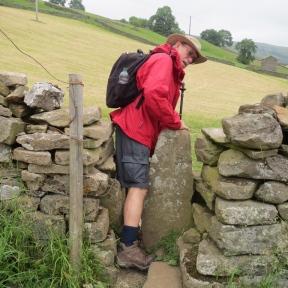 The stile passageways are becoming ever tighter! 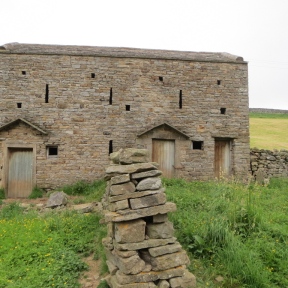 Our next stop, Reeth, is a quintessential Yorkshire village that featured frequently in the 1980s TV show All creatures great and small. It’s old enough to have got a mention in the Domesday book and has long been prosperous because of past lead mining and its role as the main market town for Swaledale.

Our B&B had the very grand name of Springfield House—before seeing it we thought we were in for something grand! Turned out to be a small private residence. Very nice though, with hosts who couldn’t do enough for us. 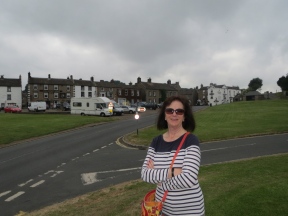 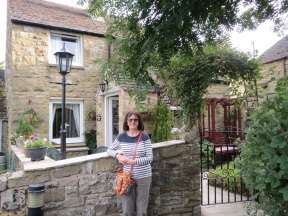 Next morning it’s on with the boots and once more on the road to head off to Richmond, a busy market town that’s the largest on the walk.

One of the things we never quite became used to was that the path often took us through farms, to the point where we’d be walking past the house and among the buildings. Always close the gates, is the motto. 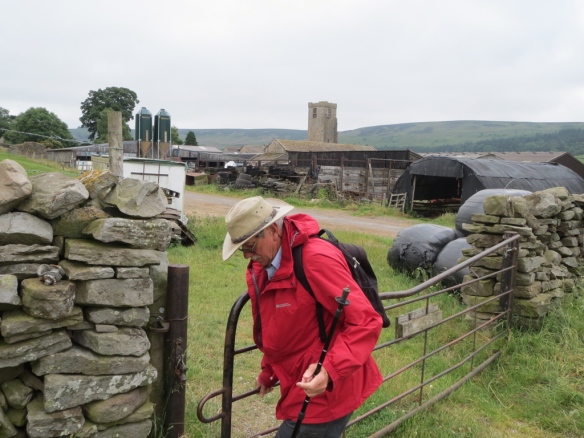 Always close the gates behind you!

The walk is an easy one with a bit of a climb to Marrick, passing along the way the ruins of Marrick Priory, which have been absorbed into an Outdoor Education Centre.

We didn’t stop, content to take a photo from the path before continuing on and up through the woodland on what is known as the Nuns’ Steps. So-called because nuns are said to have laid the 375 steps as a walkway to the abbey. 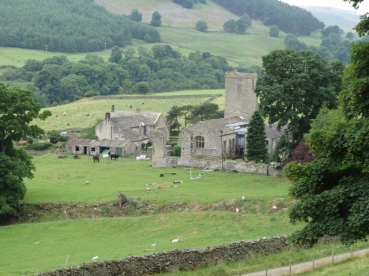 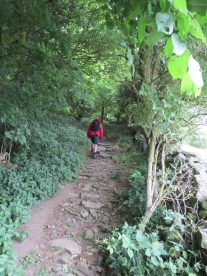 The trail then becomes a long walk through farmland, heading towards Marske, half a mile out of which the guidebook told us to start looking for a white-painted cairn towards the top of Applegarth Scar.  Blowed if we could spot it!  After a minute of squinting I spied what I thought might be it only to find, through binoculars, that it was a reclining cow.

We ended up taking a punt, headed for the nearest hill and got lucky; it was the right hill! 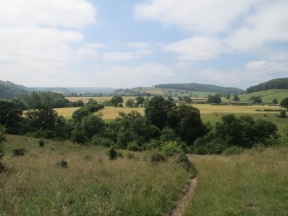 We’re heading for a white cairn up there somewhere 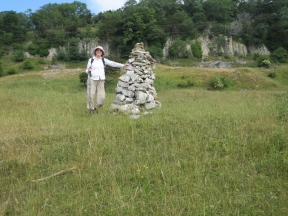 Fortunately the rest of the walk into Richmond was straightforward, along paths alternately giving views of farms, the River Swale and woodland. 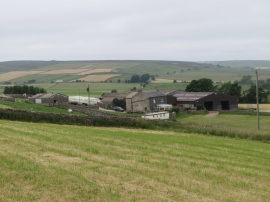 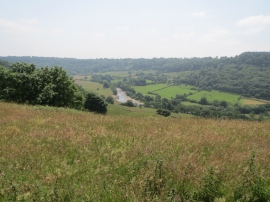 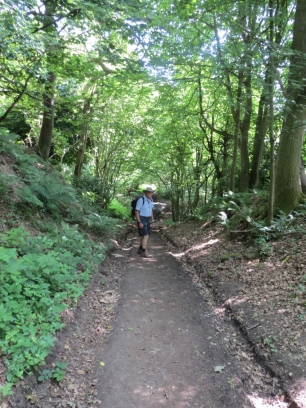 Until, at last, we spy Richmond from our lofty position above the town. 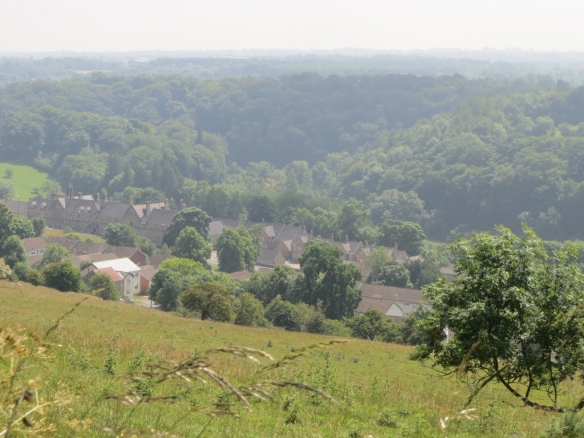 We have two nights booked at a B&B in the heart of the town. 17th century oak-beamed Willance House is just off the main square and it takes us only as long as a shower and change of clothes takes before we’re off and out exploring. 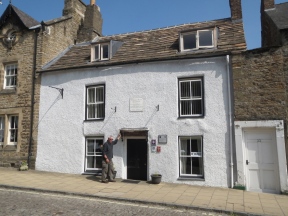 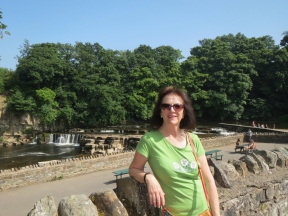 A lovely picnic spot on the edge of town

The town boasts the ruins of an 11th century castle built by Alan the Red. Not much remains as the stones were scavenged over the years by locals to build houses. 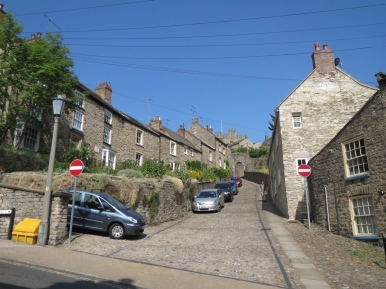 We could easily have stayed another day but our accommodation is pre-booked so we must be on our way.   We therefore bid farewell to Richmond. 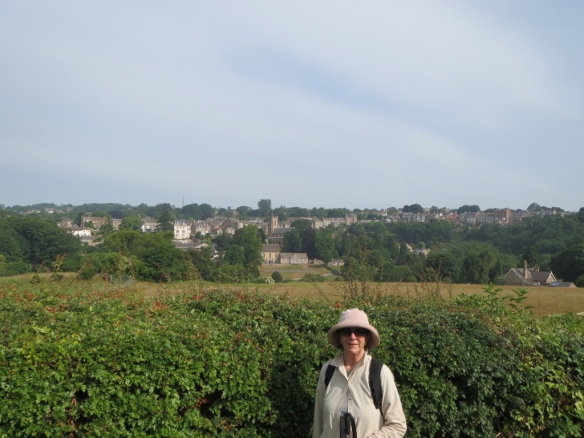